Emerald derives from the Greek word “smaragdus” which literally means “green.” The soothing yet intense green color can range from a light green to a bold green, the deeper the green, the more valuable it is. The rarest emeralds are those that have a rich green-blueish hue. 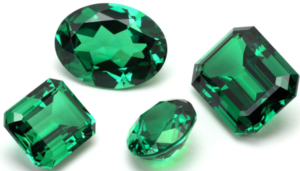 Though emeralds can be found across the globe in places like Brazil, Afghanistan, Zambia and Colombia, high-quality emeralds are less accessible and quite limited. For that reason, it is customary for a number of treatments to be used on emeralds in order to enhance its color, clarity, and durability.

An emerald is not only a breathtaking gem to wear, but it is also a meaningful gift to forever be treasured. Give the gift of peace and prosperity to a friend with emerald gemstone jewelry decorated with rich emerald gemstones. Or reignite the pure love between you and partner with an emerald stone engagement ring. Also, perfect for graduation gifts and sweet sixteens gifts. 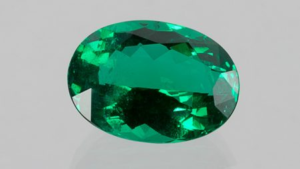 For the May baby the emerald gemstone has been thought to signify eternal youth, rebirth, wisdom, and growth granting the wearer good fortune and immortality.

In the past, many believed the emerald held more than just symbolism. They believed that along with the stone’s enchanting beauty, it also carried mystical healing powers that could possibly cure diseases, lessen fear and ward off panic. Ultimately, the wearer of an emerald gemstone is granted relaxation, serenity, and joy which makes the perfect recipe for transformation and enlightenment.

The history behind the gemstone is just as deep and rich as its color. See below for some quick historical facts and folklore about emeralds.

* Like aquamarine, emeralds are a part of the beryl family and is the most famous of them all.

* In the first century AD, Pliny the Elder, a Roman author, published a book called Natural History in which he states,” …nothing greens greener” than an emerald. In reference to the use of emeralds by lapidaries, he says, “…[they] have no better method of restoring their eyes than by looking at the emerald, its soft, green color comforting and removing weariness and lassitude.”

* The first known emerald mines were in Egypt, dating from at least 330 BC into the 1700s.

* Cleopatra was known to have a passion for emeralds and used the gemstone in her royal adornments.

* The Vladimir Tiara was made for Grand Duchess Vladimir, aunt of the last Russian Tsar Nicholas II.  It was smuggled out of Russia during the Revolution by a British diplomat.  In 1921, it was sold by the daughter of the Grand Duchess, Princess Nicholas of Greece, to Queen Mary, who then adapted the tiara to take fifteen of the celebrated Cambridge emeralds as an alternative to the original pearls.  The tiara was inherited by Queen Elizabeth II from her grandmother, Queen Mary, in 1953.

* One of the most famous precious stones in emerald history is the Mogul Mughal. Originally from Colombia and sold to India to Muhal Emperors, this emerald is a 219-carat talisman featuring engravings of Arabic scripts and a Shi’a Muslim prayer on one side. On the other side of this famous emerald is an intricate floral carving. In 2001, the Mogul Mughal Emerald sold for over $2 million at Christie’s London auction.

* The Empress Tiara, worn on many occasions by Empress Farah of Iran. The tiara holds seven large emeralds across its top varying from 65 carats to 10 carats. It was designed by Harry Winston for the occasion of Farah’s marriage to Raza Shah Pehlevi in 1958.

* Elizabeth Taylor’s Bulgari emerald and diamond suite was a gift from her legendary lover and occasional husband, Richard Burton. He bought it for her while they were filming Cleopatra in Italy.

* One of the most famous emeralds in the world is the Chalk Emerald, which weighs a staggering 37.8 carats. “It ranks among the finest emeralds to be discovered due to its outstanding clarity and velvety rich green color,” says Harvey of Muzo. “It originally weighed 38.4 carats but was recut and set in a platinum and gold ring designed by Harry Winston Inc., where it is surrounded by 60 pear-shaped diamonds totaling 15 carats.” It was donated to the Smithsonian by Mr. and Mrs. O. Roy Chalk in 1972 and can be found on display in the Gem Gallery at the National Museum of Natural History.

Shop Gabriel & Co.’s full line of emerald birthstone jewelry here and find the perfect piece for you or to celebrate a loved-one!

By Robin Lefkowitz-Huska Pearls are the only gemstones formed within a living organism, making them the…

Throughout our 25 year legacy, we’ve watched a wide variety of bridal jewelry trends…

March Birthstone Aquamarine is a stone as sea blue as it sounds. The stone ranges…

Recent Posts
Archives
Categories
I am the footer call-to-action block, here you can add some relevant/important information about your company or product. I can be disabled in the Customizer.
Get In Touch