Birthstones have been around for a while, but not necessarily in the way we know them today. The ancient idea of assigning gemstones in a symbolic way originated in Biblical times. In Exodus, the Breastplate of Aaron is vividly described. This sacred article was garnished with twelve distinct gems—ones that signified the twelve tribes of Israel. As time passed, in-between the 1st and 5th centuries A.D., some individuals associated the twelve stones incorporated into Aaron’s Breastplate with Zodiac signs, alleging that the gems held powers. The stones were even used to treat illness. Those who owned the jewels would wear a specific stone during its assigned month. Today, this practice has changed. Now instead of everyone wearing the same stone month by month, individuals wear their particular birthstone year around. Wearing the stone that parallels one’s birth is a recently concocted idea. The birthstone list originated in 1912, backed by the National Association of Jewelers. In 2002, the list was amended, and tanzanite was added to the other two December birthstones—zircon and turquoise. 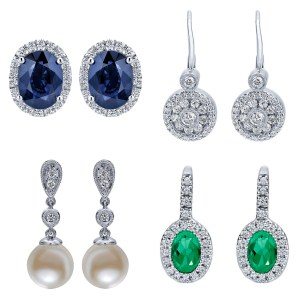 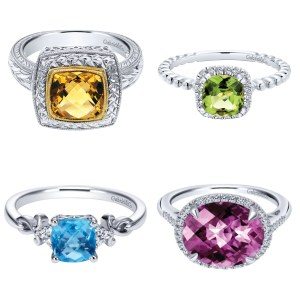 In our modern day, we understand birthstones do not contain any magical powers. Despite this, birthstones are a guiding force. They are a symbol of someone we love or a gem specifically for an individual. We can wear a reminder of our grandmother born in September around our neck by donning a sapphire. We can commemorate the month we were married in with its assigned colored stone. Those born in July can fill their jewelry box with rubies. We can look at a brightly colored gem and a face comes to mind. Birthstones might not heal, but they make us remember and relate.

Mothers wear rings or necklaces comprised of the stones that represent each of their children. Young girls born in May are gifted emeralds and those born in February ate given amethysts. Customers frequently enter our store remarking, “I don’t know what to get my wife for her birthday, but she’s born in November.” This leads our sales team in the right direction. They guide the bewildered husband over to a case of citrine treasures.

Below is a full list of birthstones. Take this guide and gift someone you love with a timeless gem—one specifically selected for them.

By Robin Lefkowitz-Huska Pearls are the only gemstones formed within a living organism, making them the…

Throughout our 25 year legacy, we’ve watched a wide variety of bridal jewelry trends…

I am the footer call-to-action block, here you can add some relevant/important information about your company or product. I can be disabled in the Customizer.
Get In Touch